March marks the 10th anniversary of the regime-change war against Syria. Following the well-worn pattern, sanctions preceded military action, as animus against the country was stoked through the usual acceptable media sources. The script parroted by those press outlets changed little from Afghanistan and Iraq, to Libya then Syria; the destruction of these societies was all for peace and betterment of the people. But where those others fell, Syria remained standing. And so, the war goes on.

Mark Taliano is a retired teacher whose next career as researcher and investigative reporter led him to travel to Syria to discover for himself the truth behind the brutal war against the population there. The result of his 2016 dispatches from the country is the book, Voices from Syria, recently revised and reissued in a second edition. 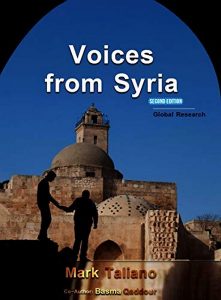 Mark Taliano in the first half.

And; terror isn’t always borne of bombs falling from the sky. There is too the existential fear of losing ones home due to a dysfunctional economic system. Call it a War on Poor. Right now, millions of Canadians live with the Damaclean prospect of failing to make rent or mortgage payments, or just being dispossessed by a landlord enticed into cashing out of the market by sky high property prices.

Leslie Robinson and Jeremy Brind are volunteer tenant organizers with VTAG, the Victoria Tenant Action Group, “a membership-based organization committed to transforming the housing system and ensuring access to housing for all”.

Leslie Robinson and Jeremy Brind and tenant issues from the municipal, provincial, and federal levels in the second half.

Chris Cook hosts Gorilla Radio, airing live every Thursday between 11-Noon Pacific Time. In Victoria at 101.9FM, and on the internet at: https://cfuv.ca. He also serves as a contributing editor to the web news site, http://www.pacificfreepress.com. Check out the GR blog at: http://gorillaradioblog.blogspot.com