Welcome back to Gorilla Radio’s continuing efforts, NOT broadcast live from CFUV Radio in the basement of the Student Union Building at the University of Victoria, but emanating live-to-tape via Skype from our home-based … studios on this date, October 5th, 2020. 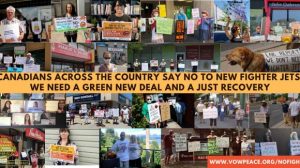 Peace and disarmament groups across Canada crossed hands Friday, October 2nd before the doorways to MP offices in every province and territory for the second No Fighter Jets manifestation. The pan-Canadian National Day of Action was led by Canadian Voice of Women for Peace, Canada’s longest-lived national feminist peace group.

Tamara Lorincz is a PhD candidate in Global Governance whose research focus is the climate and environmental impacts of the military. Tamara’s also on the advisory committee of the Global Network Against Weapons and Nuclear Power in Space, World Beyond War, the No to NATO Network, and she served as VoW’s lead person for the second No Fighter Jets day of action.

Today, Tamara Lorincz and Canadians saying “No!” to the unjust and ecocidal war economy.