Welcome back to Gorilla Radio’s continuing efforts, NOT broadcast live from CFUV Radio in the basement of the Student Union Building at the University of Victoria, but emanating live-to-tape via Skype from our home-based … studios on this date, August 5th, 2020. 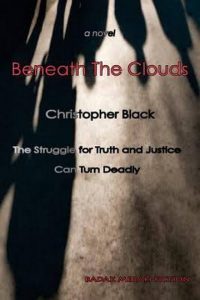 Twenty months in to her Vancouver house arrest, Huawei CFO, (and daughter of the Chinese corporate leviathan’s founder) Meng Wanzhou entered a new court filing in B.C.’s Supreme Court. In late July Meng’s legal team charged that, among other things the proceedings against their client had quote, “been poisoned” and “can no longer be reasonably regarded as fair…”. Meng has already lost one appeal to throw out the extradition petition filed by the United States in B.C. courts, and the case has predictably proven a particularly prickly political sticking point in Canada-China relations.

Christopher Black is a Toronto-based criminal lawyer specializing in international war crimes cases. He’s also an executive member of the Canadian Peace Congress. Black’s articles on international law, politics, and World events appear at New Eastern Outlook among other places. And, his timely novel, ‘Beneath the Clouds‘ “a story of how people, acting collectively, can defeat tyranny” is newly out.

Christopher Black in the first half and the international tug-of-war testing Canada’s “Rule of Law” credentials.

Chris Cook hosts Gorilla Radio, airing live every Thursday between 11-Noon Pacific Time. In Victoria at 101.9FM, and on the internet at: http://cfuv.uvic.ca.  He also serves as a contributing editor to the web news site, http://www.pacificfreepress.com. Check out the GR blog at: http://gorillaradioblog.blogspot.ca/